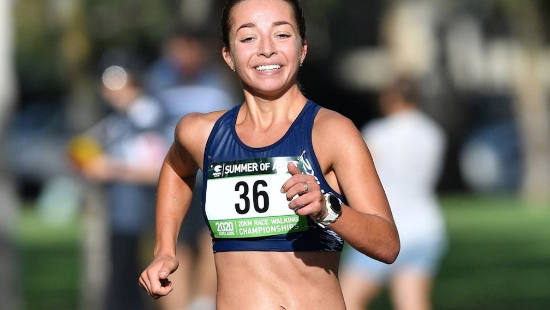 Jemima Montag says that the services provided by the Victorian Institute of Sport is a pivotal reason for her automatic race walking nomination to the Tokyo 2020 Olympics.

With the guidance of her Victorian Institute of Sport strength and conditioning coach, Cory Innes, combined with the education provided by VIS dietitian, Jess Rothwell, Montag believes “with that support, anything’s possible.”

After winning the women’s race at the Oceania and Australian 20km Race Walking Championships in Adelaide last Sunday, it was enough to earn Montag an automatic nomination to the Tokyo 2020 Olympics.

“Just the word ‘Olympics’ has given me butterflies” she says.

“Sacred because I know it’s a once in a lifetime opportunity, exciting because it’s a childhood dream come true and motivating because my purpose feels stronger than ever and my ability to reach out to and inspire others will lift.”

Montag says that since being “welcomed into the Victorian Institute of Sport family” in 2018, her training quality and consistency has “really lifted.”

Uniquely, the Victorian Institute of Sport offers athletes a range of performance services such as strength and conditioning, sport science, physiotherapy, massage, recovery, nutrition and performance lifestyle all under the same roof - something that Montag credits as being instrumental in her development as an elite athlete.

“Having access to everything we need as an elite athlete in the one environment, has been pivotal.” She says.

When she first arrived at the Victorian Institute of Sport, Montag immediately began working closely with strength and conditioning coach, Cory Innes. “The first year was very “traditional,” says Innes, but they’ve since been able to focus more on movements specific to what she’s doing when walking.

“We initially had to build-up her capacity to work, as well as introduce her to a lot of different movements and exercises.” He said.

“But this year, we’ve worked more on her elastic abilities, so the ability to store energy in the muscle and then release it.”

The early Olympic nomination, now gives Montag an ‘edge’ in her upcoming preparation and Innes says that it’s awarded them both the opportunity to put “more work in now, so she can do less later.”

“This year, we’re able to do more of the faster power work, in combination with the strength.”

“We don’t need to taper for competitions earlier in the year, and instead can go back to base work now, and then race a couple of races in May.”

“By having a larger period to work with, the more we can get done now the more that will transfer into her walking when she’s going in July.”

“And when she’s going in July, we will know she’s strong, robust and ready to perform.”

Montag is also able to get an edge over her opponents with the use of the Victorian Institute of Sport’s climate chamber. The climate chamber is able to be modified to match certain temperatures and climates all around the world, and with the 20km Walk now being held in Sapporo, the chamber will be able to replicate the hot and humid conditions that are expected in July. Innes compliments Montag’s training coach Brent Vallance’s ability to plan for certain racing conditions.

“Brent has done an amazing job of knowing exactly what kind of conditions the walkers are going to encounter at certain meets, and then ensures that Montag has the right adaptations and exposures to heat or climate.”

Montag also acknowledges that her early nomination has taken some of the pressure off and given her an opportunity to switch her focus.
“[This result] means I can switch my focus from selection to things like adapting to the hot and humid climate, making my technique as smooth as possible and accumulating some quality training over the next five months, to hopefully produce a special performance.”

Also in her corner, is former Australian Race Walking champion and VIS dietitian, Jess Rothwell. Together, they have been working on energy availability for Montag’s training demands.

“Going forward, we will be working on continued adequate energy availability in both home and altitude environments which includes nutrition periodisation and supplement usage, as well as practising hydration strategies for training and competing in heat.”

Rothwell and the nutrition department have also provided the education around increased training requirements during altitude blocks when juggling a demanding lifestyle to ensure our athletes remain on top of their game.

“We reassure and educate our athletes around body image and that physique changes across training and competition cycles.”

Last year, in the lead up to the humid conditions in Doha at the 2019 World Championships, Montag completed both active and passive heat training, which allowed for Rothwell to measure fluid loss and capture her sweat rate and in some session’s also enabled her to understand GI tolerance of carbohydrate and electrolyte-based gels or fluids, all in order to maximise performance.

“Montag has practised a lot with specific hyper-hydration protocols, which will be key to supporting her performance in Sapporo.”