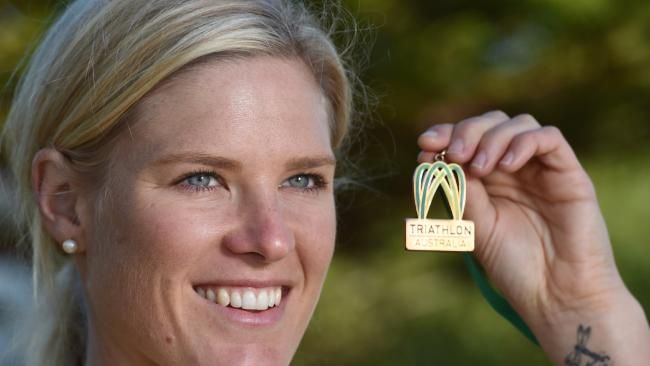 It was a great day for VIS para-triathlete Kate Doughty at the 2016 Penrith ITU World Paratriathlon, winning the gold medal in the elite women’s PT4 category.

Doughty, a former international Para-equestrian star, faced a particularly tough field but she had her sights set firmly on a podium finish. 24 years after setting out to achieve her Paralympic dream the moment has finally come with her nomination for Rio.

However she did it the hard way!

“The swim was rough, we had the biggest wave of 24 and I got pulled under the first 100m. It was a bit of an adjustment trying to find my rhythm and spot.

Once back on terra firma the troubles continued.

“I couldn’t get my good arm out of my wetsuit, I dropped my goggles and swim cap so couldn’t pick them because my good arm was stuck. All the little minor things happened, so it was a good practice run.”

She was behind after  the swim but in the early stages of the bike she took control.

“Claire (GBR) and I were on the bike and she’s a solid racer, I got in front of her and there was a bit of a headwind but the bike felt awesome, I’m just loving the bike.

She continued to move away from the Brit and as she crossed the line pointing to the sky in memory of her mum who passed away in 2010.