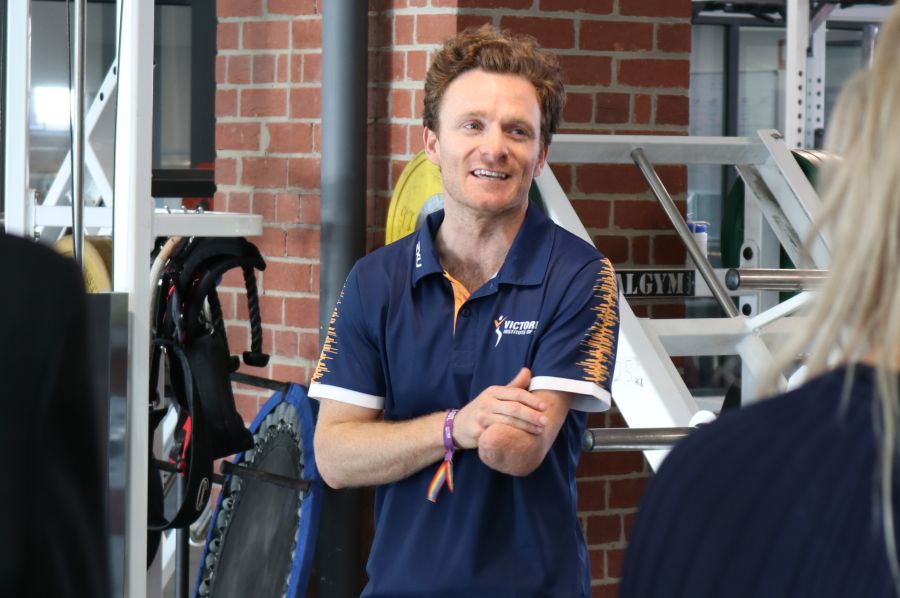 IDPwD is a United Nations observed day aimed at increasing public awareness, understanding and acceptance of people with disability and celebrate their achievements and contributions. The day also focuses on empowering persons with disabilities and ensuring inclusiveness and equality.

This year’s IDPwD theme is “Leadership and participation of persons with disabilities toward an inclusive, accessible and sustainable post-COVID-19 world.”

At the VIS, our Paralympians have achieved great success in their chosen sports and other areas of their life, and serve to remind us that anything is possible.

We have a wonderful history of supporting Para athletes dating back to our first program in 1990. Some of our notable trailblazers include, but are not limited to; Tim Matthews, Don Elgin, & Kelly Cartwright (Athletics), Dylan Alcott OAM (Wheelchair Tennis) and Carol Cooke & Emily Petricola (Para-cycling).

Most recently, many of our Para athletes enjoyed great success at the Tokyo Paralympic Games. 31 VIS scholarship holders represented Australia, with our athletes bringing home an impressive 4 gold, 12 silver and 5 bronze medals.

There were many inspirational moments and highlights, including Emily Petricola smashing her own world record and winning gold at her first Paralympics and Dylan Alcott OAM notching up back-to-back wheelchair tennis gold medals in the Quad Singles.

With the Beijing 2022 Paralympic Games now less than 100 days away, we are looking forward to watching our Australian Paralympic athletes in action.

To acknowledge IDPwD, we are shining a spotlight on our VIS para-alpine skier Mitch Gourley who is hoping to compete at a fourth Paralympic Games next year. Gourley has been an outstanding leader of the Australian winter team and more generally within the Paralympic movement and epitomises the VIS’ motto of 'Success in Sport and Life'.

Gourley has enjoyed a glittering alpine skiing career spanning 15 years, highlighted by the past three Winter Paralympic Games and medal success at World Championship level and multiple World Cup victories. The biggest win of his career was when he became World Champion at the 2017 IPC Alpine Skiing Worlds at Tarvisio in Italy.

That year, he won a slew of awards, including the VIS Elite Athlete with a Disability Award, Ski and Snowboard Australia Para-athlete of the year, Victorian Disability Sport and Recreation Awards – Male Sportsperson of the Year, Australian Institute of Sport Para Performance of the Year and was named, alongside Joany Badenhorst, and Co-captain of the Australian Team for the 2018 Winter Paralympics in PyeongChang.

It had been a long journey for Gourley, who had looked primed for success as early as the Sochi 2014 Paralympic Games after his impressive two gold, three silver and one bronze medal haul throughout the 2013/14 IPC Alpine Skiing World Cup Series.

Despite working hard to improve on his results from Vancouver 2010, the Barwon Heads local struck an unbelievable run of bad luck in Sochi, recording three DNFs (Did Not Finish) in the Men’s Giant Slalom, Slalom and Super-G, and a fifth and seventh place finish in the Super Combined and Downhill, respectively.

Away from sport, Gourley is a passionate advocate for athlete well-being. He is a member of the inaugural AIS Athlete Advisory Committee and has also served as Chairman of the World Para-Alpine Skiing Athlete Advisory Group and Athlete Representative to the International Paralympic Committee’s Sport Technical Committee for Alpine Skiing. He has also completed a Master of Business (Sport Management) from Deakin University after earlier completing a Bachelor of Commerce at the University of Melbourne in 2014.